Okano Electric, always look to the future, respect the individuality of employees, taking advantage of the imagination, with a mind to challenge the new possibilities, foster the outstanding technologies, while fulfilling its social responsibility as a company, customer satisfaction degrees to the first, safety, quality, to provide a superior product environmentally friendly, we have a basic philosophy of contributing to society. 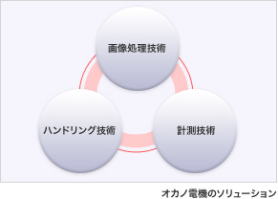 A new wave of business.
Aiming a custom solution of FA.


In the electronics field, handling technology, measurement technology, bringing together the image processing technology, aggressive proposal-based business, we will continue to create a FA system to aim the new era that conform to customer needs. Making full use of superior technology and rich experience, just fit to user needs. Answer of FA system that leads to a new era, custom-made it Okano Electric....'30 As an in-circuit tester manufacturer, in Okano Electric boasts a history 27 years as a chip mounter manufacturers, that take full advantage of the wealth of experience and a track record that has been cultivated since its inception, its position as FA equipment and system manufacturers in the current it has a convincing thing.And, its solid technical force automation system to be created by the will, not only to the printed circuit board industry, DVD ・ electronic and electrical industry, mobile phones, and the like of the communication industry PDP ・ digital camera, such as a digital industry as a beginning, transport of automobiles, etc. industry, such as the food industry, has been utilized in the industrial field a wide variety. Your environment, purpose, custom-made equipment and system-line along the specification will lead to your further reliability, and to the improvement of productivity.